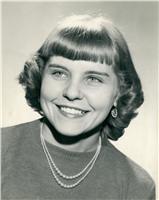 At Mount Hope Long Term Care London on Saturday, July 20th, Stella Anne Bannister (nee: Kazmar) in her 82nd year. Beloved wife of the late William Paul Bannister (1975). Dear father of Gregory Bannister (Shirley) of Toronto and Christopher Bannister (Judcy) of London. Loving grandmother of Jamie, Emma, Allison, Eric and Ryan. Sister of Walter Kazmar (Marilyn) of Union, ON. Predeceased by her sister Eleanor Edwards. At the age of 12, grandmother went to work in an ice cream cone factory and later she worked hard doing odd jobs to help her family during the depression. She saved enough money to contribute to the family welfare and still take train rides to Port Stanley where she enjoyed orchestra music by Guy Lombardo and Vaughann Munro. Grandmother was always hard working and optimistic even after she became a widow at 44; she continued to work at Canadian General Electric and later, the Industrial Accident Prevention Association (IAPA), and also gardened, travelled and most of all helped raise her grandchildren up into the fine people they have become today. Grandma's special gift was her hard work and attitude towards meeting head on what life deals out. She loved her family equally and without judgement. She will be sadly missed. Memorial visitation will take place Thursday, July 25th, from 7:00 - 9:00 p.m. in the O'Neil Funeral Home, 350 William St., London. Private family interment in St. Peter's Cemetery, London.