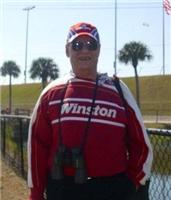 At his home with his family by his side, on Tuesday, October 16, 2012, Robert "Terry" Wayne King in his 58th year. Beloved husband of Shari Lee (nee: Lysenko) King. Cherished father of Adam "Robert" and Ashley "Shari" (Robert Lynch). Dear son of Robert Alan King and the late Annie (Romphf) King (2010). Visitors will be received on Thursday, October 18, from 7:00 - 9:00 p.m. in the O'Neil Funeral Home, 350 William St. where the Funeral Service will be conducted in the Chapel on Friday, October 19, at 11:00 a.m. Interment Forest Lawn Memorial Gardens, London. Memorial donations may be made to the Canadian Cancer Society, online at http://www.cancer.ca