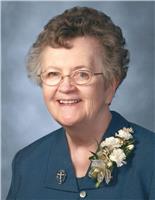 Sister Bernadette was a gifted educator, serving children as a teacher and beloved Principal in London, Kingsville, Ingersoll and Windsor, for 37 years. After her retirement from teaching in 1990, she served in Congregational leadership for 8 years, also representing the Congregation on hospital boards in London and Sarnia, as a Director of St. Joseph's Health Care Society, as a board member for Family Services London, and on various committees. She later served as local leader and administrator at Mount St. Joseph until her retirement to the Sisters' Residence.

Bernadette's clarity of thought and organizational ability made her an exemplary administrator. Her strong, quiet presence created community and gave a sense of support to others. Always self-effacing, she accomplished much with no fanfare.
She will be missed by her Sisters in community, her beloved family and the many people whose lives she touched.