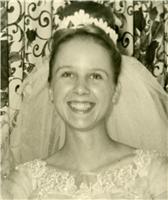 
Judith "Judy" Anne (nee Foerster) Bushan, 71, of London Ontario died peacefully on July 25, 2014 at Chelsea Park Nursing Home, London, after a lengthy battle with Alzheimer's. Daughter of the late Stephen & Edna Foerster, she is survived by her loving husband and best friend of 50 years, Larry Bushan. Judy was the proud and loving mother of two daughters, Lauralee (Dave) Jazey and Lisa (Chris) Autuchiewicz and four grandchildren, Teah, Fraser, Andrew and Ryan. Judy is also survived by her sister Carolyn Fontyn, her brothers Larry Foerster and Alan (Corrie) Foerster, and many nieces and nephews. Predeceased by her brother Frank Foerster. Judy was a dedicated homemaker, exceptionally talented cook, avid fisher and celebrated bowler. For the last 20 years Judy has celebrated birthdays in Cuba and had developed many strong relationships there. She will be missed by many. Visitors will be received in the O'Neil Funeral Home, 350 William St., on Tuesday, July 29th from 7:00 - 9:00 p.m., and on Wednesday from 10:00 a.m. - 11:00 a.m. at which time the Funeral Service will be conducted in the Chapel followed by interment in St. Peter's Cemetery, London.
The family wishes to thank the amazing staff of the 3rd floor at Chelsea Park Nursing Home for all their genuine care and compassion displayed in caring for Mom. Please direct, in Judy's memory, donations to the Alzheimer's Society (www.alzheimer.ca) or the Diabetes Association of Canada (www.diabetes.ca).