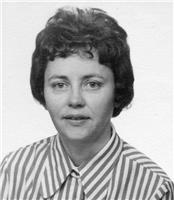 Peacefully at Henley Place Nursing Home, with her family at her side, Janet Georgina Avery in her 80th year. Dear mother of Richard Avery and Bruce and Sandra Avery. Loving grandmother of Brendon, Alexander, Olivia and Kaitlyn. Cherished sister of Alice Sparrow of Winnipeg, Manitoba. Janet was born and grew-up as well as attended University in Winnipeg, Manitoba, then spent the majority of her time in London and Niagara on the Lake, Ontario. The family would like to thank Dr. Alam and staff, the caregivers at Parkwood Hospital, C.C.A.C., the staff at Henley Place, and her close friends for the care and kindness given to Janet. Visitors will be received in the O'Neil Funeral Home, 350 William Street, London on Tuesday, May 3rd from 6:00 p.m. until the time of the Funeral Service which will be celebrated in the chapel at 8:00 p.m. Private family interment in Winnipeg, Manitoba at a later date. Memorial donations may be made to the Alzheimer Society London & Middlesex (www.alzheimerlondon.ca). Online condolences & Guest Book at www.oneilfuneralhome.ca