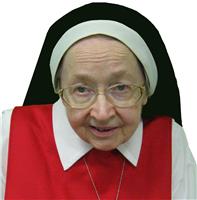 On July 19th, 2016 at the Precious Blood Monastery in Hamilton, Sister Helen Mary Land entered Eternal Life in the peace of the Lord and in the hope of Resurrection. During her long illness, and for the last months totally bedridden, Sister received care by our faithful nurses. Our chaplain, Father Robert Dunn and her Sisters in Community were a daily presence with her, providing opportunity to participate in the Sacramental life of the Church. Sister was in her 88th year of life and the 67th year of her vowed commitment in religious life as a Sister Adorer of the Precious Blood.

Sister Helen Mary was predeceased by her parents Marie Helen (Lewis) in 1968 and Charles Peter Land in 1973, her brother John Land in 2003 and a nephew, Thomas Land. She is survived by her sister, Diana and brother-in-law, Ted Morris of Victoria, her sister-in-law, Sheila Land of Hamilton, nieces and nephews Eileen, Charles, John and Margaret Land and Ed, Richard, Michael, Mary and Kim Morris as well as numerous grandnieces and grandnephews.

Born in Hamilton, Ontario, Sister Helen Mary was baptized in St. Patrick's Church. She attended St. John's Elementary School and graduated from Notre Dame Academy in Waterdown. Sister was gifted with a beautiful soprano voice and received training in voice, piano and music theory. This was a gift she used throughout her religious life as music is an important part of the daily prayer life of each Precious Blood Community. Sister Helen Mary's simple, gentle disposition carried over into all aspects of life as Sister served the Community and her Lord in Monasteries across Ontario and in Calgary, Alberta.

Visitation will be held at the Precious Blood Monastery, 154 Northcliffe Avenue, Dundas, Ontario, Friday, July 22nd from 3:00 to 5:00 pm and from 7:00-8:30 pm with a Prayer Vigil at 7:30 pm. The Funeral Mass will be celebrated by Father Robert Dunn on Saturday, July 23rd at 10:00 am. Interment will follow at Holy Sepulchre Cemetery, Burlington, Ontario.
To order memorial trees in memory of Helen Mary Land, please visit our tree store.