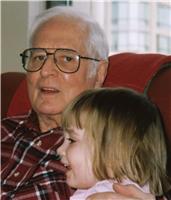 At University Hospital in London, Ontario on April 15, 2016, Frederick Henry Armstrong in his 91st year. Born in Toronto, Ontario on March 27, 1926 to Dorothy Lillian (nee Goode) and Silas Henry Armstrong, long time Superintendent of Playgrounds for the City of Toronto. Attended Queen Victoria Public School, Parkdale Collegiate Institute, and received his B.A., M.A., and Ph.D. from the University of Toronto. Fred was a history professor at The University of Western Ontario from 1963 to 1991, where he specialized in 19th century Canadian political history, and urbanization. Fred published many scholarly and popular works and was the recipient of numerous awards, including: Fellow of the Royal Historical Society; the American Society for State and Local History's Certificate of Commendation, and The Award of Merit; Western's President's Medal; and the Ontario Historical Society's Cruikshank Gold Medal. Survived by his wife Joan (nee Biberovich) who, in his own words, gave him "a wonderful life." Also survived by his children Dale, and Irene (Gintaras Uleckas), and granddaughter Simone. We would like to thank everyone who helped care for Fred these past months, particularly the staff at Highview Residences, and Dr. Chris Brymer. At his request there will be no service. Fred will be interred at Prospect Cemetery, Toronto. If you desire, a donation to The Ontario Historical Society, 34 Parkview Avenue, Willowdale ON, M2N 3Y2 (www.ontariohistoricalsociety.ca) in his honour would be appreciated. O'Neil Funeral Home in charge of arrangements. Online condolences & Guest Book at www.oneilfuneralhome.ca Condolences may also be sent to: fharmstrongfamily@gmail.com