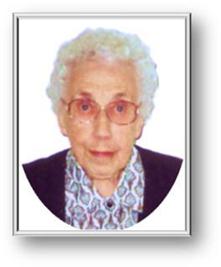 At the Sisters of St. Joseph Community Centre, Nazareth, MI., on Friday, May 25, 2012, 13 days after reaching her 101st birthday, Sister Francis Clare (Angela Madaline) Vickerd in her 102nd year.

(Obituary from the Sisters of St. Joseph, Nazareth, MI):

Angela Vickerd was born in Woodslee, Ontario, Canada on May 12, 1911, the daughter of John and Pauline (Miller) Vickerd. Angela was a member of St. John the Evangelist Parish in Woodslee, Ontario, Canada at the time of her entrance into the Congregation of the Sisters of St. Joseph of Nazareth on August 2, 1936. She received the name Sister Francis Clare at her reception on August 24, 1937. She pronounced first vows on August 26, 1939, and final vows on August 25, 1942.

Sister Francis Clare earned a Bachelor of Arts degree in English from Nazareth College and a Master of Arts degree in Latin from St. Louis University. For fifty-two years Sister Francis Clare ministered as a teacher in several of the congregation's high schools including St. David Parish in Detroit, St. Gertrude Parish in St. Clair Shores and St. Francis Xavier Parish in Ecorse. Eleven of those years she served as a principal. She then served the congregation as Mistress of Junior Professed Sisters followed by fifteen years of ministry as secretary to the SSJ Regional Coordinators in the Detroit Area. In 1995 Sister Francis Clare retired to Nazareth where she assisted in a variety of ways. She distributed mail each day to the sisters at Nazareth Center and Fontbonne Manor and she enjoyed visiting with the elderly and infirm sisters. Throughout her many years of ministry Sister Francis Clare worked tirelessly to make life easier and more pleasant for those whose lives she touched.