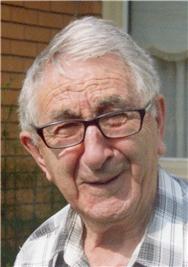 With his family at his side, at his residence in London on Friday, June 29, 2012, Costantino Di Nucci in his 84th year. Beloved husband of Lucia (Giancola) Di Nucci. Dear father of Josephine Ciccaglione (Mike) and Tony Di Nucci (Lida). Grandfather of Albert (Marta), Christina (Ted), Sonia (Daniel), Lucy (Luca), Philip, Stephen and Dino. Great-grandfather of five. Also survived by his brothers Joe (Livia), John (Connie) and Nick (Concetta) and his sisters Annina, Maria (Costantino), and Lucia (Angelo), his sister-in-law Margherita (Eugenio) and by many sisters-in-law, brothers-in-law, nieces and nephews in Europe and Canada. Predeceased by his sons Philip (1984) and Rocco (1965) and his sister Carmela (1992). Visitors will be received in the O'Neil Funeral Home, 350 William St., on Monday from 2:00 - 4:00 and 7:00 - 9:00 p.m. A Mass of Christian Burial will be celebrated in St. Mary's Church (345 Lyle St. at York) on Tuesday at 11:00 a.m. Entombment St. Peter's Cemetery, London. Prayers Monday at 3:00 p.m. The family offers a special Thank You to nurse Carol Ramsdale. Memorial donations may be made to St. Mary's Church Restoration Fund.