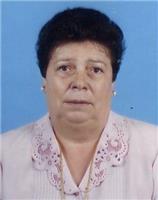 Peacefully, with her family by her side, at St. Joseph's Hospice, London, on Friday, September 15, 2017, Arminda Tarrataca in her 78th year. Beloved wife of the late Claudio Tarrataca (2010). Dear mother of Luis (Shannon) and the late John (2009) (Isabel). Loving grandmother of Cassandra (Josh), Emma, Sarah, Maddie, Filipe and Sydney. Also survived by her sister Maria (Silverio), her brother Claudino (Idalina) and her sister-in-law Maria. Predeceased by her brothers Manuel, Silverio and her sister-in-law Nazare.
Visitors will be received in the O'Neil Funeral Home, 350 William Street, London on Sunday, September 17, 2017 from 1:00 - 4:00 p.m. Mass of Christian Burial will be celebrated in Holy Cross Church, 10 Elm St. at Hamilton Rd. on Monday, September 18, 2017 at 10:00 a.m., followed by interment in St. Peter's Cemetery, London. Memorial donations may be made to St. Joseph's Hospice www.sjhospicelondon.com.
To order memorial trees in memory of Arminda Jesus Tarrataca, please visit our tree store.